The Four Elements in Astrology 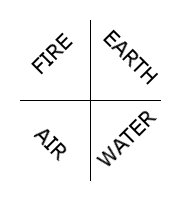 An important thing to know about the zodiac is that the twelve signs are grouped into several categories. Perhaps the most widely known of such categories is the elements. Most of us probably have heard that Aries is a sign of Fire, Taurus is a sign of Earth, etc, etc.

But what exactly is an element? What does it signify?

Well, first of all we should start by saying there are four elements: Fire, Earth, Air and Water. And their existence goes all the way back to ancient Greek philosophy. It was Empedocles, an ancient Greek philosopher, who claimed that the world consists of those four elements; and it was the good old Ptolemy who incorporated them to Astrology. At those times they were also connected to medicine by Hippocrates, who claimed there were four types of temperaments based on their dominant element.

Nowadays what we know about the elements comes mostly from the work of Carl Jung, a great psychoanalyst who saw in the four elements four distinct types of personality and four types of perception.

Those type could be described as:

So next time you ask someone of his sign, try to remember:

From this knowledge alone you should be able to draw a first conclusion of what to expect when hanging around that person.