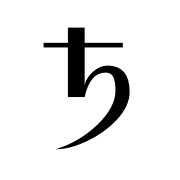 The symbol for Saturn is the cross of matter above the semicircle of the soul. It symbolizes the physical limitations which stop us from being open to our neighbor.

Saturn is complementary to Jupiter, as the limiting principle that balances Jupiter's expansion. Saturn looks melancholic, subdued, limiting, serious, economic, authoritarian and disciplinary. It controls time, loss and the expansion of limits. It represents self-discipline, which makes us stand on our feet and prevents us from depending on others (in which case we would be similar to the other pole, the Moon). It gives shape and form to things, and requires effort and responsibility in order to reward us. This effort is required in exchange for autonomy. Saturn allows us to make a reality out of our plans, to make a fact out of something which until now has just been a potential, a possibility.

As a person or profession Saturn is the farmer, the policeman, the judge, the watchmaker, the legislature, the traffic warden, the manager, the architect (also influenced by Venus), the engineer, the cartographer, the mason, the factory worker, the miner, the archaeologist, a member of the jury in its function of the verdict (but also influenced by Mercury, Venus or another planet depending on what is judged).

As a location Saturn is related to abandoned, deserted, and rocky or remote places.

In mundane astrology Saturn rules real estate, shares (as property itself, not as a potential profit), the law as sedation, administration and heavy industry.

Some of Saturn's characteristics are:

Psychologically Saturn is considered as that stage of development which precedes our individuation (the stage of the Sun). It works as a father who sets rules and limits and requires effort in order to offer reward and allow freedoms. In this way it teaches its descendants how to evaluate themselves based on results -- a thing which they will continue to do for the rest of their lives. M.E. Harding describes it as more or less the maturing consciousness which emerges because of discontent; that is, out of that particular situation where one instinct is opposed to another. In that case the need arises to choose between two instincts and place the losing instinct under control. This initiates the conflict between conscious choice and the suppressed desire. This conflict therefore forces the person to make conscious choices; if not, it would fall into hesitation and its disruptive effects, and it could probably lose its life.

Looking it from another point of view, Saturn is a depressed planet, while Jupiter is a maniac. They create a dipole, where Saturn symbolizes the practical and rigorous nature of the conservative parent who wants to keep the status quo of the facts, regardless of the soul intentions of the people in the group he/she is the head of. This creates a known condition we describe as "the conservatism and obsession of Saturn," which Uranus comes later to break down. On the other hand, Jupiter stands for the understanding parent, who exercises tolerance and is not very strict in keeping the law.

Vassilis Papadolias, born in 1971, is a professional computer analyst and astrologer. He started working as a professional astrologer in 2009 after some ten years of being an editor in various astrology forums, including Myhoroscope.gr, the Greek Forum of Astrodienst, and Astrology.gr. Since 2009 he is also a publisher, publishing books for astrology students and a three-month astrology review (NewAgeAstrology English) along with other fellow astrologers.
Copyright © 1997-2021 Ed Perrone. All rights reserved.